THE NEW YORK PIZZA WAR IS OVER

Roma Pizza Is Hands Down #1 Pie in New York


It’s finally over. And it took formally trained Italian pizza makers to end it.

The war I speak of is the New York City pizza war… now raging into a 6th year. Sure, you can argue that John’s, Lombardi’s, DiFara’s, Patsy’s, Grimaldi’s… well, all of the classics…. have been at war for decades. But it was when the onslaught of Neapolitan pizza joints flooded the city when the official “war” began. Deep dish? Not in this town.

Let’s look at some history.

Mario introduced OTTO years ago and won critical acclaim for out-of-the-ordinary single-plate pies…. that is, to the NY palate. His gamey, sometimes fishy, always chewy ingredients are an acquired taste for some, which left his shop on the outside looking in. Maybe it’s his cheese condiment and Italian wine selection that keeps the place packed… but it’s not for award-winning pizza.

I too was on the neo-craze when shops like Motorino and Kesté opened their doors… and they make a good product (if not “too” good, thank you extra charred crust). It seemed then that the days of a regular slice form Ray’s was a thing of the past and that other than the tourist trade; the regular slice was just about dead. Pretty soon…Donatella, Eataly, Olio… well, a lot of them moved in. There was smoldering crust from Brooklyn to the Bowery. I’d love to be in the wood-burning pizza oven business. But that said… as all of them make a quality pizza…. they can now bow to the king.

For those of you like I who have spent a great deal of time of the streets of Rome, Italy, you know this pizza. It’s light and airy, with an unmistakable crunch. It’s rectangle in shape and it usually cut with a pair of scissors. It flies into a hot over for a quick reheat, then onto a napkin for fast consumption. This my friends, is roman style pizza…. and the pizza at Roma Pizza of Bleeker is the best pizza in New York City. Period. (Who would have guessed their other outlet would be in Barcelona?) 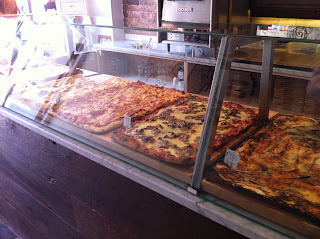 I had been waiting for months for this store to open and find it’s legs before I made my trek down to the West Village… but today was the day. I couldn’t wait any longer.

As I approached the store, I could see the unmistakable sign of a true roman pizzeria… the long counter of perfectly baked square pizzas… with an aroma that could knock you down.

It was so reminiscent of Rome, I had to rub my eyes. The thin sliced zucchini, margherita, crostino with prosciutto, soppressata, potato and rosemary… good lord, where to begin?

After a moment of composing myself, I pointed at the potato and rosemary and asked for a slice. At $3.50, what you really get is a giant piece, quickly warmed to a crunchy crisp and sliced in two.

When it arrived in the cozy backroom, it was resting on a piece of paper, over a wooden tray. Perfect. 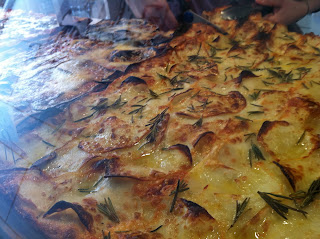 The pizza? Well, hard to put into words. They allow the dough to rest 96 hours at Pizza Roma, which no doubt gives the crust an airy, delicate consistency. It’s almost pastry like when it arrives at the table, and the toppings are just the right temp.

There is a freshness to the cheese that is unmistakable… an attribute that other than crust, can really distinguish one pizza place from another. There is an unmistakable flavor when cheese is freshly grated… as to cheese that arrives in a bag. The freshness of the ingredients with the perfect buttery crust is what makes the Pizza Roma slice, the best pizza in the city.

This pizza can be enjoyed a few ways… by the slice, and by the pie. 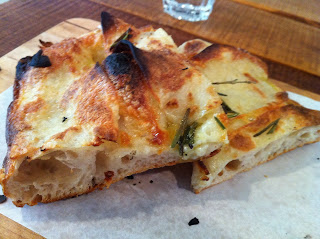 If you plan to eat in or take out, Roma offers 2 sizes of “square” pies, that can be baked to order, with just about any ingredient they carry.

Additionally, there is a great boutique wine selection available, with a few other dishes (salads, lasagna, etc) that looked terrific.

Sure, making the statement about NYC’s best pizza is a big one… but I’ve done it. I’ll challenge anyone to find a better tasting, more satisfying slice.

I guess the question is, which slice will you declare the winner?