Dinner and a Show: Thalia Shines In Midtown

Steps to Broadway, And A World of Choice

There is something magical about a pre-show dinner in New York’s Theatre District.

Having served up about a 20 million of these, most of the restaurants have the thing down to a science. They know how many drinks you can have, when you should be ordering, and how much time you might have for desert... to get you into your seats on time.

I’ve had many a pre-show meal down there… including the solid Orso, the mostly disappointing Ruby Foo’s (great martinis can bring you back) and the touristy Osteria al Doge.

But one of my true favorites happens to be Thalia. 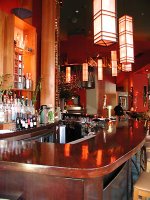 Thalia is the quintessential date place. What’s that mean? Well, there is a lot of eye candy in the hip, midtown design… and the food is even better.

My first trip to Thalia was last year, and I had no date. Working in NYC I found myself yearning for a bachelor theatre night, and had scored a front row ticket to Spelling Bee, one of the more fun evenings on Broadway.

With an hour to curtain and a cigar in my pocket, I landed steps away from the theatre at Thalia on the patio… sipped a martini, lit my cigar, and munched on a duet of yellow fin tuna sashimi and tuna tartare. For a quick entrée I had two delish crabcakes (more crab than crumbs to my surprise) and for desert, a terrific banana tart.

A few months later I was back, this time with my lovely wife at my side, and those same Spelling Bee tickets. Yes, I like the show that much.

This trip to Thalia had spanned the season and seen the chilly patio close, exposing the cozy, classic interior space as the true star of the show.

With reservation in hand, we were seated in less than a minute. Once at the table, I began to remember just how much I had enjoyed my last visit.

Having enjoyed my patio visit, this meal also started with the tuna and crabcake apps I remembered… but also included dinner choices as I planned my time a bit more diligently.

Cheese selections are a great albeit pricy option at Thalia, but the entrees shine.

The pastas are simple, well rounded… and flavorful. The spaghetti is a basic tomato and basil dish… wile the Mushroom Ravioli a more complex creation with asparagus and porcini truffles. 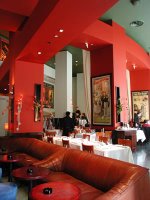 Meats are wonderfully prepared and include a fine double cut pork chop that I found filling. Also available is a Seared Duck Breast, Braised Lamb Shank and a Grilled Filet of Beef, with a black truffle sauce. All solid.

Fish lovers won’t be disappointed, as the traditional bistro salmon and halibut make an appearance… but even better is the broad choice of fresh oysters from the raw bar. Littleneck clams shine here… and the jumbo shrimp cocktail can hang with most in the city. I have found all of the seafood here to be very fresh.

Yes, the food is good and can occasionally be very good. But the vote of confidence here is for the night.

A classic place, a good menu and a great bar.

Followed by a great show, and I think you have the recipe for a near perfect theatre evening in NYC.

Enjoy Thalia. And oh yea, if you haven’t seen Spelling Bee, do yourself a favor and get a ticket while nearly the entire original cast remains on Broadway. This is a charming night of theatre, appropriate for just about all audiences.

See you in the Theatre District!