Not long ago I was discussing Mika family relatives with my Dad, who reminded me that my Polish grammy (his mom) and Russian Great-Grandmother were both Jewish. My polish grampy round out the side of New England based family, which married into my mother's french-acadian South Louisiana cajun side... making for a culinary miracle. Gumbo and pierogies. I knew their had to be some explanation for my love of jewish foods.

So, now as I rate all types of restaurants, I feel somewhat qualified to speak on corned beef. 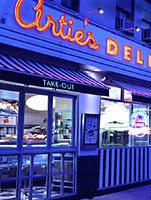 I’ve got a vote for “Best Corned Beef Sandwich in New York” and guess what?.... it’s not Katz’s, Stage Deli or Carnegie.

It’s Artie’s, located on the Upper West Side.

Honest engine. Not that I don’t love Carnegie’s mile high sandwiches, or Katz’s tangy and sour pickles… but there is a greatness that Artie’s has achieved that the others just can’t claim. It’s a true neighborhood joint…. sans the tourists and crazy prices.

I fell in love with the deli life nearly 15 years ago, in Chicago. Growing up in Louisiana, the only deli I had ever heard of was on television, as real Jewish delis just didn’t exist. Sure, I ate my share of corned beef and pastrami, but it was usually in the way of a poboy or in a rueben sandwich at a bar.

In Chicago, I found Manny’s and Original Frances and discovered a love for the deli. Later in Los Angeles, I continued my quest and became a regular at spots like Art’s, Canter’s and Nate n’Al’s.

But is was New York that sealed the deal for me, and I’m here to profess my love for Artie’s.

First, let me say not every item on the large Artie’s menu is a winner. I have never been a fan of items at this or any deli that strayed too far from traditional. So at Artie’s, stick with the corned beef, soups, salads, knishes and platters. You can’t go wrong.

I like mine with very little fat, warm, sliced thin, piled high… and melt in your mouth. That’s Artie’s. It’s not an insane amount of corned beef (like Carnegie, etc) but a huge amount…. so much I need to remove half of it to get the sandwich down the hatch. The fresh rye bread is on par with what you would expect and the mustard is robust. Simply put, it’s a perfect sandwich.

What else do I love? Love the mushroom barley soup. Chef salads are crisp and plentiful. Hot dogs are great, for those who love ‘em big and grilled. The omelette’s are good, as are the burgers, stuffed cabbage and potato pancakes.

I do have a few rubs…. one is the pastrami which Artie’s love to hype as being the best. I’ve ordered the pastrami on several occasions, and find it just too fatty. I love the taste, but when I am spending more time maneuvering around the fat (too chewy to eat) than chomping, the distraction becomes a nuisance.

Next are the pickles. Yuch. Maybe it’s me, but these taste as if they were cured in formaldehyde. What ever happened to the straight ahead kosher dill?

Additionally, delivery can be an adventure. When ordering from home (which we usually find to be fast and reliable) make sure you repeat those items that are important (a side of this, and extra of that) as many times these don’t make the bag.

It may sound like a few gripes, but compared to the corned beef…. and eh. No big whoop.

All in all, yes, Artie’s is my reigning champion of Corned Beef. But knowing me, that could change next week… as the quest continues.