As the fast food craze continues, Danku sets up shop and looks for their crowd.... 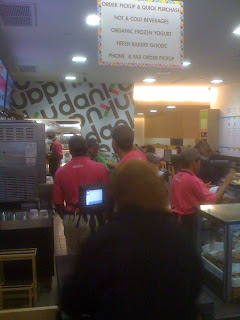 As I have mentioned before, I am all about fast food. Especially fried food. I am from Louisiana. We fry food, then we fry it again.

That's why when I saw that Danku, the new sudo-euro-strangemenu-thingy opened in midtown, I was excited. Yum! Fried stuff.

What I learned was that the fried egg roll looking thingy was actual a Kroket... a food I was familiar with traveling in Northern Europe... and not that fond of.

What is a kroket? Well, picture this.... a large, egg roll shaped object, fried crispy on the outside, filled with raw goo. And when I say raw goo, I mean pasty, snotty, raw flavored goo.

Danku offers many flavors of their raw goo rolls.... beef, chicken curry, salmon dill, mac and cheese (they were out of this one), spinach and artichoke... you get the picture.

To make matters worse, they offer these in a "meal deal" with a fancy boxed salad. 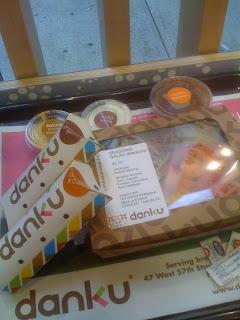 Let me first say that while I wasn't thrilled that the kroket had emerged in the USA, I went in with an open mind (and palate). Surely, you can make a kroket 10 different ways? But sure enough, this was the same kroket that I had tasted in Amsterdam, and thought... ugggh. That's when I hit the Maoz stand and became a lifelong fan of their falafel, the best in the world.

While I am no big fan of the kroket (and I eat everything fried mind you) the rest of the menu looked ok.... a few satay choices, some salads and sandwiches, etc..... lots of organic garb. But when you hang your hat on serving the kroket, well, you have a problem. 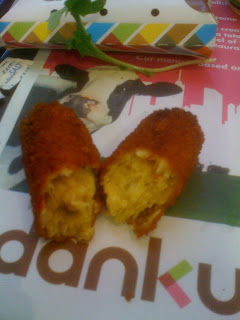 So the final grade? Well, for the kroket itself, I bestow a healthy D+, as while this isn't my thing you may certainly have a taste for these. For the rest of the joint, when you take away the kroket, it becomes one of a hundred "healthy choice" stores that litter Manhattan.