London: Ghosts of A Glorious Past 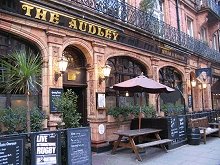 I have had the good fortune of traveling the world with my work. From Bangkok to Budapest, Denmark to Rio… I have stepped foot into some 30 + countries… and honestly, I think I’ve learned something from each and every one of them.

This week there was business to be done overseas in short fashion as I made a mad dash through Europe… starting in London. Aboard the swift EuroStar train, we completed a charter trip that landed us in Cannes, France in just 8 hours. The train averaged about 185 miles an hour. On a train, that’s moving.

I’ll expound on France in a few days, but I thought I’d take a moment to salute my friends in jolly old England. This is a spot for me to air my comments on food, travel and lifestyle and London is a city near and dear to my heart, and for mainly one reason.

For me, much of that tradition starts with the pub. Before we dig deeper regarding the jolly pub, let me qualify a few things I’ll say about the United Kingdom.

From a travel and luxury standpoint, England doesn’t exactly jump out of the travel books at you. It’s not known for spas (although there are many), extraordinary cuisine (although they boast some of the world’s greatest chefs), extreme sports (ok, the line a Harrods can get hairy at times) or sandy white beach resorts with buff tan bodies (no comeback for that one). On the flip side, the sights are plentiful… and these are places you have been staring at in history books since 3rd grade. But why does a trip to England stick with you?

The glory of the United Kingdom is tradition. You feel it, smell it, touch it. Having only a few hours off to make a foot trip across my favorite part of town, I rediscovered London again…. for the 8th time.

My “hood” is and always will be Mayfair. Mayfair is situated south of Hyde Park, and walking distance from Picadilly Circus and Soho. It is a well to-do area with some of the world’s finest shopping, boutique hotels and art galleries. It has an abundance of public squares (Berkely Square, Grovsnor, etc) and winding streets that lead to nowhere. I love this area because I love to walk to where I’m going and hate to walk back. The trip back from Soho is just far enough to justify a ride in a black taxi ( plenty far enough at 2-3 miles).

So, let’s chat about the Pub.

First, a proper British Pub is a very different place than your local bar and grill, no matter how English they try to be. Even the Brit Pubs in NYC and Boston don’t have the feeling of an authentic pub found in London. What they lack is the heart and soul of the mere existence of such a place… a value that must be earned over time. Say, several hundred years. 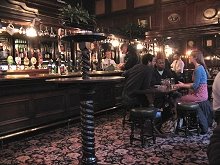 The proper English pub is one built of dark woods, antique carpets or shiny wooden floors, and a long bar with many taps. It is adorned with brass and copper appointments. There is an old crusty guy with a wrinkled face along side a younger, decidedly unattractive girl who has received more than her share of marriage proposals. In the air wafts the unmistakable smell of fish and chips and bangers and mash… along side of a stale beer smell that has lingered since the late 50’s. There are stairs leading to a bathroom, either up or down. The music selection is a bizarre mix of Tom Jones and Supertramp which doesn’t really matter if there is an English Football (soccer) match on the television… we’ll soon all be singing athletic songs as the evening progresses. People are smoking cigarettes like each one may be their last.

Rules abound at a proper pub. First, many pubs don’t allow sitting at the bar, as it makes the task of stepping up to difficult when the time comes to request your pint. You’ll also notice that there is a gift to pouring a beer, and if it isn’t just right, the Londoners will let the barkeep know about it. My favorite quirk?… there is an unspoken acknowledgement that you will be having another pint, no matter how many you’ve had…. therefore you never have to ask for another, you just need to know how to say stop. Depending how many pints you’ve had, this can prove to be harder than it may seem.

The Duke of Albemarle, The Audley, The Stelly… three of seemingly three thousand pubs in and around London. What makes them so amazing?

Imagine the feeling of knowing the very bar you share your workday stories at, is the same bar your Grandfather discussed proposing to your Grandmother with his chums… likely drinking the same beer.

At Brown’s, a remarkable hotel situated in the heart of Mayfair, I sipped the driest gin martini known to mankind while enjoying a Cuban cigar in their small and distinguished bar, located right off the main salon where they serve high tea daily. A bowl of cashews accompanied the cocktail as a man approached me in a crisp black jacket.

“Churchill loved this bar”, remarked the elderly bartender, the son of the previous barkeep for some 45 years in the same room. I gazed at him in amazement. “He loved taking meetings here so he could come down here afterwards and hide”, he said with a wry smile.

I later learned that Brown’s has been welcoming Heads of State and Royalty to Mayfair for well over 150 years. Imagine the conversations that had happened in this room. At my table. With this martini.

Tradition.
Posted by André Mika at 9:00 AM