Bella Luna: Struggling To Be Average


Missing The Mark On The Upper West Side

I’ve never quite understood how a barely average restaurant can survive in New York.

With a high concentration of well above average places… especially Italian spots… it would seem that any place that didn’t do at least one thing well… well, would shutter it’s doors.

Bella Luna is a classic example of a destination that just misses the mark... but has remianed open for a long time. 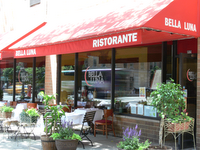 On the outside, the store has a few things going for it… a great location, on the corner, outside seating in season, a bar… etc. The rest is a miss.

First, the staff (although friendly) is robotic and absent. They simply go through the motions, yes to his, no to that. There is no personal service, no recommendations, no nothing.

“How are the specials today?” we asked. “I don’t know. We’re not allowed to try any of them,” she replied. “They look pretty good.”

“The veal… it comes with pasta I see. Can I get it with meat sauce?” I asked.

“Yes. For an extra three dollars.” She replied.

See where I am going with this?

Inside the bland dining room (turn the lights down maybe?) we sat. The somewhat dressy room was filled with very casual diners, a welcome sight in a nice Upper West Side neighborhood. Unfortunately the décor and menu have nothing in common.

The menu itself is fairly simple, with some apps, salads, pasta dishes, fish (small selection) and veal/chicken dishes.

We started with a plate of beets with goat cheese, which were fine and uneventful.

This was followed by a house salad.. a plate of mixed baby greens (average) with a house dressing plopped on top. Note to chef: take a moment and do your guests a favor… toss this salad in a bowl with the dressing, and hit it with some course salt and fresh cracked black pepper. Then place it next to the salad you serve now… and ask yourself which one you would rather eat.

Our main courses came next… one, a special of the day… an artichoke ravioli in a pink sauce. I thought this might be a special sauce, until I saw it on the menu as a regular item… which means this is the incarnation of a lazy kitchen. Again, the dish (which had a few grilled chicken tenders added) was spectacularly average.

The other dish was a veal parm, with a side of pasta and meat sauce. The veal was barely average, and the pasta well, well below average. Lumped onto the plate with the veal, it was terribly overcooked in a meat ragu with very little flavor. I cook much richer sauces at home with likely half of the resources of their commercial kitchen. Shame shame. 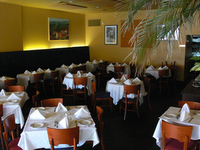 I failed to mention that I opted out of ordering a bottle of outrageously priced wine, and ordered a glass of house white, which was undrinkable… and believe me, I’m easy when it comes to wine.

There was a dessert menu, but with the level of quality where it was, we decided to walk next door and try the frozen yogurt.

What makes me steam about restaurants like Bella Luna is the lost potential of all of it. A great locale, loyal neighborhood and seemingly fixable kitchen. I know this place has been here forever… but let me lend the owner this advice… take a long look at your menu from top to bottom, then go out to eat. Experience the range of top shelf Italian cooking in the city, and compare your fare. If you shy away from your own dishes… make a change. I’m not telling you to pretend to be a Lupa or Felidia… but be something. Your lost identity and run of the mill menu will soon fade into NYC restaurant oblivion.

Truth be told, you can have a much better meal a block away at Pesce Pasta… an unpretentious gem that will practically cook any dish you can dream up, at a cheaper price. It is a simple place with a simple menu… that doesn’t pretend to be something it’s not.

Stay tuned to Fork New York! I am headed to Europe with a report from Amsterdam… home of the world’s best bowl of tomato soup!
Posted by André Mika at 10:54 AM