Steak and Lobster Is Still Fancy, Even in 2006

Sometimes, you need to get old school.

Yes, your dearly beloved foodie turned 40 this gloomy June weekend, and to celebrate I decided to depart from the frilly and trendy to seek out the crusty, long-standing old timer. You heard it. No pomegranate martini. No cucumber spritzer. I’m talking old school.

After a bit of snooping around, I found not 5 or 10, but dozens of NYC spots that could fit into this category. I settled on a spot that opened in 1926, an annex of the famed “Palm” restaurant…. better known as “The Palm, Too”.

Palm Too is one of those places you would swear you saw a mafia boss. Through the front door reveals a severely undersized bar with no stools, and a smallish cramped dining room. Not knowing the size of the place, I thought that was it! But when we were seated, we realized, there is a maze of rooms in this cave of culinary history.

History abounds as the walls of the Palm Too are a living cartoon. Drawings of patrons, celebs, politicians, you name it…. they all live here. There is simply too much to look at. 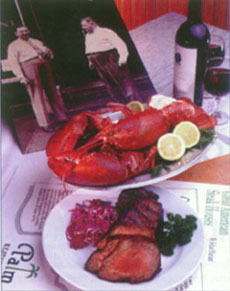 Truthfully, if a restaurant has been open for over 75 years, you would think that they are doing something right.

Palm Too does a lot right, but my guess is that the main reason they are still in the mix, is that there isn’t much that has changed.

The specialty of the house here is Nova Scotia lobster. Big ones. No, I mean huge ones. The smallest weighs in at 4 pounds. The largest, a little over 6. We got the 5 pounder.

This breed of lobster is different from the Maine variety, as the tails are a bit smaller… making the claws monstrous. I’m talking the size of your hand. Like steak big. Really.

You can get it boiled if you wish, but you’ll need to talk the waiter into this option, as nearly every lobster here is split in half and broiled. This style is done artfully, as the lobster was still moist and buttery, not too dry. Important.

As we were celebrating, we didn’t want to leave out our friend the Filet Mignon, so we also ordered a filet, butterflied and broiled perfectly. This is a good idea when splitting a lobster.

The sides at Palm Too are yummy. Even though the cottage fries and friend onions are standard, we opted for the pan of crispy hash browns, that came from a skillet in the kitchen. They were formed into a massive, 2 inch pancake and pan fried crispy golden brown. We killed these.

Also at the table were the asparagus fritti, lightly breaded and fried, topped with a buttered sauce and grated cheese. Nice.

The deal of the summer at Palm too is the lobster. A 5 pound lobster for 2, with salads, 2 sides and coffee or tea will set you back $85. Think about it… not bad. We added a steak and a bottle of wine and escaped for a reasonable amount. There is some value on this menu.

As for dessert, you'll be tempted. I must confess, the carrot cake may be the best I have ever out in my mouth. Served in an 8 inch high wedge, it was so moist it melted in my mouth... and the cream chesse frostings were top notch. Someone really knows what they're doing back there.

Can it get better? Sure. Our service was superb. Friendly, helpful and attentive… we had everything we needed, and then some. When you dine there, ask for Dominick.

Overall, we felt as if we had discovered a slice of NYC that few new existed…then of course realized that it was in fact us that had come late to the party. 75 years late.

Palm Too. Step back in time and enjoy. Decades of history can never be a bad thing.

And the lobsters are the real deal.