Not Worth The Ticket


Let me first preface this blog by saying that no one wants to be blown away by a restaurant more than I. When a restaurant gets it right… the food, the service, everything… it makes me downright giddy.

I’m not that hard to impress.

The Oyster Bar in Grand Central just blew it.

I was excited about this visit, as a kid born and raised in South Louisiana, I know seafood. I know fish, I know crab, I know oysters. This was gonna be good.

But from the moment I hit the door, the evening started heading south.. and there was simply nothing I could do about it.

At a glance, the place reeks of nostalgia. First, how freaking cool is it to have a seafood joint in the train station, steps away from the tunnels and tracks? Only in New York.

I wandered in a few minutes before the rest of my party arrived and checked it out… a large dining room packed with hungry folks… a lunch counter straight from 1955 with a few scattered diners slurping down chowder, a cozy back room and bar packed with couples and an oyster bar with able onlookers enjoying their cold beer and pan roasts.

The excitement was building. One of a kind, I thought.

But when I hit the hostess stand, it ended. There I was greeted by a few pretentious “I wish I worked for Mario” employees that would send the evening south in a hurry. The attitude was horrific, and I paused and wrote it off to a long day, or something else… as I know this business. I have owned 2 restaurants myself, and have hired dozens of hosts and hostesses. They all have bad days. 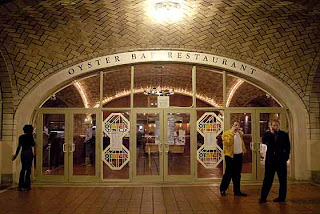 But as hard as I tried, it didn’t matter. Someone should call and let them know that this isn’t Alain Ducasse, but a seafood place at the train station. They were simply rude.

When my buddies arrived and we were seated, the Big Cheese from the host stand wandered over to the table.

On this night, I was dressed in nice slacks, a crisp white long sleeve polo, a tie, and matching baseball cap (my calling card)…I listened intently.

“Sir, would you kindly remove your cap,” he asked.

“Am I offending someone?” I replied.

“I’m the only person here wearing a tie. Are you sure I can’t keep it on?” I pleaded.
“You need to remove it,” he answered.

“You are aware we are in a train station,” I replied.

“We happen to be surrounded by a train station, yes,” he stated,

So, I removed my cap… which I don’t mind doing, when appropriate. But give me a break… this is a train station. There is a drunk at the counter on his 8th beer. Whatever.

About this time the confusion began. The table was approached by not one or two, but three different people asking what we may want to drink, or start with from he raw bar.

Hmmmm. I smell a mandatory employee meeting coming on.

The first dish to arrive we a pile of nearly inedible steamed clams. Gritty and smelling like they were pulled out of the water a month ago, the were a bomb at the table and enjoyed by no one… a real disappointment, since several diners had their hearts set on this dish.

Next was the chowder, a thick and creamy New England style bowl that was quite good. Not good enough to make the trip for, but certainly good enough to order when there.

We did order a tray of oysters, which arrived shortly after the chowder. These too were fine, but at 2 and 3 dollars apiece, may be the biggest rip-off in the city. The varieties are amazing… Whitecap, Penn Cove, Kumamoto, Eld Inlet, Willapa Bay… and the list goes on and on. But the server didn’t know enough about what makes them different… just the sizes. And where I come from, an oyster is an oyster. You want it fresh, cold, a bit salty, and firm. There really just isn’t any other kind.

And oh yea, in Louisiana, you can often get oysters for .25 at the bar.

Next was the main course, a New England lobster, steamed with the trimmings.

I wish I could boast on how the lobster saved the night, but the truth is any idiot can steam a lobster, so as you guessed, it was just fine. Certainly overpriced and undersized, but fine none the less.

So, heartbroken, I write this blog. From the exterior, I love this place. The look, the idea, all of it. It would be a place that I would bring out-of-towners. But with overpriced, uneven, mediocre food, I just can’t, knowing that I run zero risk of embarrassment somewhere else. 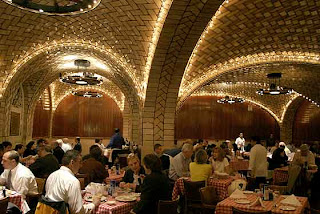 The Oyster Bar in Grand Central is known for it’s budget lunches and pan-roasts, which I admit are cooler than cool… and maybe that’s how this place was built to be enjoyed. But when you plop down a huge chunk of change for bad to average food, attitude and uneven service, well it leaves a bad taste in your mouth.


Photos by Noah Kalina
Posted by André Mika at 11:04 AM