MAOZ COMES TO THE UPPER WEST

It’s crowded, confusing and annoying, but it’s still the best falafel in NYC

Being a resident of the Upper West Side for nearly 3 years, I’ve watched in amazement as the area continues to turn into a NYC food destination.

Sure, the opening of the Time Warner Center was the spark, but then entered noted chefs, long time brands, and even…. well, even Shake Shack.

What this means is that the overall feeling towards dining on the Upper West has changed, and so have the people who call it home. Instead of moderately priced average tasting fare, Upper West Siders have made it clear… cook well and we will pay. Hence, the onslaught of swanky new digs (Bar Boulud, Bloomingdale Road, etc). 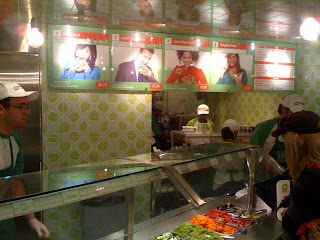 Well, when the big boys move in and set up shop, so do the less-expensive newbies such as international vegetarian chain Maoz. I have been a long time Maoz lover, having had my first delish falafel outside the train station in Amsterdam about 4 years ago. Since then, Maoz has expanded their euro operation into the US market, and NYC has been the beneficiary of a few locations, including their newest at 70th and Amsterdam.

It took about 24 hours after opening for me to make my way to the new store, a much closer jaunt for me from my UWS digs than the tiny Maoz that opened on Union Square, some 75 blocks south… about a year ago. 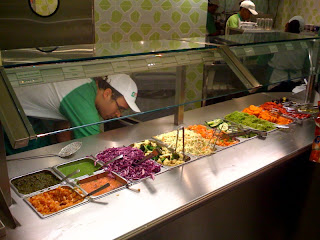 As with any opening, there is good and bad, so here we go:

Well, it’s Maoz. This is the most flavorful, best tasting falafel in New York, period. You may find larger (Moshe Cart on 46th) or cheaper (just about anywhere) but this recipe works so well it converted even me, lover of all meat and seafood, to crave the stuff.

Even better is the homemade bread, and veggie bar, that exists for you to dress YOUR falafel, the way YOU want it. It’s the old “Have It Your Way” Burger King idea, except you dress the thing… more like the old “Burger Chef” chain…. Remember Burger Chef and Jeff? Crap, I’m getting old.

The Belgian fries are good if you eat in… but not so good if you take them home, unless soggy is your thing.

Well, this store needs to get its act together. The lines are long. The menu is confusing as hell. People have no idea how to order. There is no method or flow at the veggie bar, so it is chaos getting to it, and then making your falafel. It’s expensive. The wait is too long. 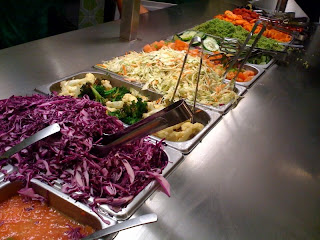 I don’t care. I’m such an addict I would wait for an hour in a blizzard for the stuff. But what I do hope (and have no reason not to believe) is that they get their act together like the Union Square store, and make the place run smoothly.

Want a bonus? The store is next door to PinkBerry. It’s falafel and fro-yo on the go-go.

Welcome to the UWS, Maoz. It’s great to have you as a neighbor!
Posted by André Mika at 12:31 PM