But Can It Compete With The Big Boys?

The Tribeca area of Manhattan is hardly recognizable from its earnest beginnings as a gritty lower west side industrial hub.

Sure the buildings remain the same, but my how the insides have changed. The development and growth of Tribeca has a direct relationship to the emergence of New York City becoming the business center of America. Tribeca was the center of the fresh fruit and produce market, the shipping capital of the United States, and the site of the first "skyscraper" in America, the Woolworth Building. It was in the Tribeca area that the textile industry grew into one of the largest employer and producer in New York.

Today, this area is loaded with trendy loft spaces, sleek bars and groundbreaking restaurant spaces. While the area prides itself on resting well ahead of the cutting edge, it also carries a charm that much of the city wishes it had…. a feeling that can only be duplicated by space, sunlight and city planning. 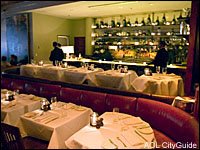 Tucked away in the heart of Tribeca is the funky steak house, Dylan Prime. A hip, stylish joint, Dylan attracts an upscale local clientele as well as those on expense accounts entertaining clients. Upon entering, Dylan offers a large (by New York standards) lounge area, with several beers on tap as well as a stocked back bar. Martinis feel right at home here, and seem to be the drink of choice. The main dining room is smallish but well appointed, if not a bit dark. It also features a bar area, which I am guessing serves as overflow on late weekend nights when scoring a table here becomes a 2 + hour wait.

As far as the food goes, I’d love to light this webpage on fire with glowing reviews, but in general I found the experience average. The steaks are good and well prepared… but if its meat you are craving, this certainly wouldn’t be my final destination. That said, if you live nearby and didn’t want to make the trek to Brooklyn or Midtown, Dylan Prime is just fine.

The menu is fairly simple but offers several interesting choices. We started with the fondue…. a good sized pot of bubbly hot gruyere cheese, with sliced apples, crusty bread and fresh crumbled bacon. Until the cheese cooled, the dish was good and perfect to share.

The menu is ala carte, with a decent choice of pricy steaks. I opted for a ribeye, and chose a few sides… homemade mac and cheese and green beans tossed with garlic.
The ribeye was a bit fatty… not thick and marbled as I was expecting. The meat was good, but the outside was well seasoned, a trick not needed if the meat is well aged and brimming with flavor.

The sides were solid, and the green beans stood out. Served tender crisp, they quickly became the focal point of my meal… not a good sign when plopping down over $30 on a steak.

What happened to Dylan Prime is what happens to most hip restaurant spots…. at some point, the food fades into the shadows, and the scene takes over. When I walked in the room to be seated, each and every head in the space turned to check me out… meaning this is a place to see and be seen... not to savor USDA Prime beef. That said, Dylan Prime is a cool hang and a spot I wouldn’t hesitate returning to for a cocktail or snack at the bar… just don’t waste your “steak” dollars here…. it’s worth the trip to Peter Lugar when you need a real fix.