It's An Upper West Secret, And Folks Around Here Like It That Way


Without question, the Upper West Side restaurant scene is again a hot topic. With spots like The Mermaid Inn, Dovetail, Bar Boulud and Eighty One getting mucho press, it would seem that the area is evolving into…. wait for it…. a destination-filled neighborhood of quality eateries. Is there really a Shake Shack on the horizon?

Truth be told, there are many solid places to eat on the Upper West…. and even though the area gets hammered by the culinary elite, the locals above 59th like to keep secrets to themselves. One of those secrets may very well be Ocean Grill. 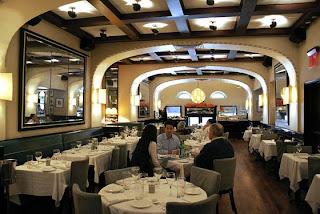 Being from South Louisiana, I’ve never been motivated to eat fish in a restaurant located farther than 75 miles from the Gulf of Mexico. Having grown up eating fresh red snapper, drum, grouper, croaker, etc…. I have come to love fish that don’t taste like, well, fish.

But being hungry for a shellfish dinner this weekend, I happily rolled into Ocean Grill (a BR Guest Restaurant) and decided to approach this “north of the border” spot with an open mind.

I was pleasantly surprised.

First, Ocean Grill is a handsome spot. You can dress down, but with a sleek décor you may not want to…. as I noticed most of the people coming in were dressed for dinner.

The menu is a bit strange at first, as most traditional seafood restaurants don’t usually offer sushi, sashimi and maki rolls…. but then it makes sense. If you have a place full of fresh fish, why wouldn’t you serve sushi?

The menu also offers a list of tempting appetizers that include the obligatory Maryland Crab Cake and Fried Calmari, but it was the Bamboo Steamed Shrimp Dumplings (a very close cousin to those found at sister restaurant Ruby Foo’s) that did it for me. Served with a ginger soy sauce and full of freshly minced shrimp, they were a great start.

It was about this time my ordering veered away from standard fare, and went the way of the shellfish.

Next we enjoyed a large platter of Jonah Crab Claws. A pound of these, about 25 claws laid over a bed of crushed ice ($41), were reminiscent of the stone crab claws made famous at Joe’s, one of our Miami favorites. Served with both cocktail and seasoned mayo, the waiter suggested and delivered a cup of melted butter that elevated the dish another notch. These were delicious, and could be a reason we swing by another day for an afternoon treat. 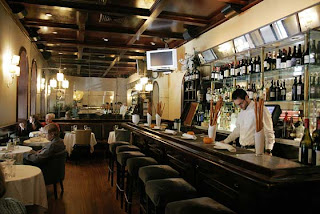 The main course was just arriving, and as you might have guessed, we stayed the course and ordered a couple of 2-pound lobsters. The fine folks at Ocean Grill will either steam, broil or grill your lobster, and we chose the traditional steamed version, likely out of habit. They will also shell and clean your lobster, an option I highly recommend if it’s one of those days you don’t feel like getting your hands dirty.

Those who come to Ocean Grill looking for fish will find numerous options, including roasted cod, horseradish crusted salmon, a familiar Chilean Sea Bass, big eye tuna and a crabmeat crusted mahi-mahi. All of these looked great strolling past us, but none made us think twice about the lobster dinner we were devouring.

Deserts are another story, as the list was inventive and impressive. Topping the list was a chocolate fondue that made saying no just a bit more painful…. But we were glad we passed as a perfect draw of espresso was all we needed to cap a perfect early supper.

As we were exiting the space, the hostess presented us with a few treat to take home, a bad of sweet muffins to enjoy later… a nice touch.

I think it’s likely we’ll be back in the future to try a few different items, as the location and quality of Ocean Grill is to good to pass up. Albeit pricy, it’s a pleasant locale…. even for those who are tough to please.
Posted by André Mika at 6:32 AM