AN OPEN INVITATION TO THE OWNERS OF BOURBON STREET

It wasn’t long ago when I sat in my living room on a Sunday morning and exclaimed to my wife… “there is a Louisiana place opening up, and I think this one has a chance to be good.... the chef looks like he is from New Orleans!”

My wife responded, “Please don’t do this…. you know how this turns out. How many times have we been down this road?”

She was right. I had just read that Bourbon Street Bar and Grille (bad name) was opening on restaurant row, and that a chef from New Orleans was in the kitchen. But instead of racing down, I used amazing restraint… I waited for them to get their act together. And waited. And waited.

Until last week. Mardi Gras. I just couldn’t take it anymore. I needed to smell the smells, hear the music, drink the drinks. It was time to head to W. 46th Street and have my first experience at Bourbon Street. Their online ad said “Mardi Gras Celebration… Boiled Crawfish, Jambalaya, Music, etc….”

So I hopped in a cab and away I went, LSU attire and all. It was late afternoon.

Walking into this place, you think, “holy crap, look at this space.” I mean, it is massive… decorated with black iron and dark wood, a massive bar and great furnishings. Someone spent some serious coin on this buildout, which I was hoping meant that the same attention had been taken to the back of the house.

We sat down, and then…. it all went bad.

The music, well, no Neville Brothers. It was the Jonas Brothers.

I ordered a hurricane, which tasted like a batch of bad kool-aid with a shot of rum.

And I ordered the “crayfish”, which came to the table (7 of them, baby sized) swimming in a pool of nasty juice, with pieces of sausage, bay shrimp and corn on the cob that had been chopped into bite sized chunks.

My heart sank and my poor wife stared at me, her eyes welling with true compassion and the words “I told you so” tightly trapped behind her lips.

“Let me know how you like these,” said the server, who had problems pronouncing just about anything remotely Cajun on the menu. “We have a new chef who has never really cooked these, so he is interested to hear what you think.”

Having tasted one taste of these putrid, overcooked, nasty smelling crawfish, I told her politely, “if he’d like to know how to cook these, or anything else on this menu, have him grab a coke and some over to the table. I’d be happy to fill him in on how these are supposed to taste, as well as all of these other dishes.”

And it wasn’t just the crawfish. The menu had some bizarre items as well… and then, basically, just gave up. It was an array of dishes I would never see in Louisiana… or anywhere. When I asked for a shrimp poboy (listed on their website) I was informed they didn't make them anymore. 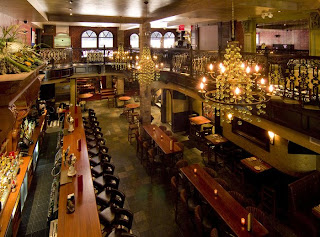 So much for the New Orleans chef. I learned from our clueless server that he had left the restaurant, and was no longer affiliated with Bourbon Street, nor were his recipes. It was making perfect sense, as I could have had a more authentic experience eating the Cajun feast at TGIFridays.

But sitting in this fantastic space, I couldn’t help but think to myself…. what if this place really had great food. Forget the gimmicks and garbage on your menu… it is obvious that the bar business is your bread and butter. What if you had a menu like George’s in Baton Rouge…. amazing poboys, gumbos, red beans…. just solid staples. Or Mother’s in New Orleans. Killer sandwiches, simple blue plate specials. Make it authentic. God forbid you actually have a menu that could be compared to the legendary Uglesich's, that closed a few years ago, after nearly 80 years in the business.

I also wondered if the management knew that a menu like that would greatly reduce their labor cost and also give them a greater margin with their food cost. And oh yea, would give them great food.

I know, because I ran a restaurant with the exact same menu as a Mother's, and operated at a food cost of nearly 23%. And, we often had an hour wait to get a table.

So, friends at Bourbon Street…. before you are death-watched, before you begin stiffing your vendors, before you start looking for more money…. I am offering you this…. an OPEN INVITATION to let me help you fix your mess.

I will gladly come in, look at your kitchen, access your current menu (this I have already done, and it is a mess), and give you a tight, delicious, authentic menu that will resonate with any person who has ever traveled to Louisiana.

Having owned 2 restaurants and consulting on several others, this is an offer you should really consider before dismissing. I don’t want anything in return. I’m just sick and tired of watching people throw away this kind of investment because they didn’t know what the hell they were doing in the kitchen. So suck it up, realize your problem, and get some help. And it doesn’t have to be me…. just get someone who has operated a Louisiana kitchen… and rethink what your menu “has” to be. You’d be surprised at how simple a menu can be when authenticity is at the core of every bite. Keep it simple.

The word of mouth on the street will be that Bourbon Street has fantastic food. That the poboys taste like those at Domilise’s… or George’s…. or Maspero.

This isn’t hard food to prepare or serve to the masses. But if you want to really live up to your name…. you’ve got to quit pretending you know what you are doing and ask for some help.

So, another Mardi Gras passes, and I am left in the streets of Chelsea missing my Louisiana once again. I quietly wander into the kitchen, put on a pot of rice and contemplate what’s for dinner. Maybe some of this shrimp and okra gumbo in my freezer? Maybe some shrimp etouffee? Perhaps some grits and ham?

Whatever the choice, I am comfortable in the fact that in New York City…. the best creole or Cajun food to be found, is in my own kitchen. I just wish I had some competition.
Posted by André Mika at 12:07 PM