But How Much Are You Willing To Spend On Sushi?

There has been a long standing argument between foodies in Los Angeles and New York over sushi. Sure, New York is the steak and Italian food capital of North America, and yes, Los Angeles has simply the best Mexican mom and pop joints on the planet…. but sushi?

Well, the argument can use Nobu as a measure, but truth be told, both cities have outstanding sushi options. The difference is in what the offering is…. 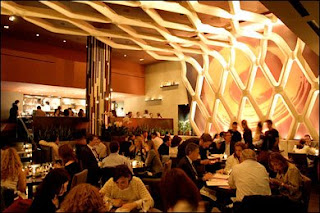 As NYC has tried and true sushi and sashimi houses (and newer fusion-type stores, thanks Morimoto), our friends in LA were ahead of the fusion curve a long time ago. I credit much of it to the incredible strip-mall pioneer Katsu-ya in Studio City… and of course, Nobu… but honestly, there are numerous spots in LA that were on this bandwagon a long time ago.

This point is what makes my review of Koi an interesting one. Plain and simple, Koi is an LA sushi house, dressed in hip black clothes, making music in midtown Manhattan. Yes, I know...Koi IS STILL an sushi joint in Los Angeles today... but you must admit, it takes serious guts to open an LA joint in NYC without changing.... well anything.

Well, without question, it’s LA’s most famous sushi dish, the Crispy Tuna Roll. By the way, if you haven’t had a Crispy Tuna Roll, stop reading this review and get your ass down there now. It’s that good.

Where did it come from?? Well, the famous roll is in fact a product of the previously mentioned “Katsu-ya”. What is it?

Well, first you combine fresh minced tuna with fine scallions and mix it in a creamy hot sauce to create a thick tuna mixture you can form into fingers.

Next, you take a same-sized finger of sushi rice, and actually “grill” it on an open fire BBQ, giving the rice a crispy, smoky flavor. You place the tuna on top of the rice and finish with a thin slice of jalapeno… and presto… you have the most popular sushi dish on the west coast.

So, true to form, before I even opened the Koi menu, I quickly ordered 2 orders (8 pieces total)… next time I’ll peek at the menu, since I had no idea that Koi charges $16.00 per order…. holy crap.

As far as the other items of the menu, they are solid and expensive. As a matter of fact, it’s all expensive. And let me remind you, I’m not usually the guy who frowns on expensive meals… but there is expensive, and also “damn, that’s expensive”. I think it’s a perceived value thing. None the less, it’s easy to drop a few hundred dollars here for dinner and drinks for two.

So now that you’ve tried your Crispy Tuna Rolls, here is what you need.

Tuna Tartare Avocado. Nice and light, with wonton crackers on the side. Nicey nice.

Sautéed Shrimp on California Roll. Spectacular. Exactly what you think it is, and to make it even better, order it on soy paper instead of nori.

Baked Lobster Roll. Also delish. Pace yourself at this point, there is more.

Cucumber Sunomono. Highly recommended as a meal and palate refresher as you travel from dish to dish. Sweet and sour bites of fresh sliced yumness.

Warm Baby Spinach and Mushrooms. A popular dish everywhere, this one is delicate and well done. Easy to share.

Spicy Seared Albacore with crispy red onions. Another Katsu-ya dish, that gets to shine here at Koi. Love these flavors, and the onions are the bomb.

And last but not least… dessert.

Order what you want, but I am partial to the Warm Asian Pear Bread Pudding with Maple Ice Cream, pomegranate and caramel sauce. Hell yea.

One thing I guess I should mention at this point is that you may need an attitude adjustment before you hop on over to Koi.

The place is ssss-wanky…. and you are reminded constantly. Arrive early with a reservation and avoid the jet setters, and you’ll thank me later. If you want to wait outside in line with a grumpy doorman while others eat your Crispy Tuna Rolls, well that’s up to you. Remember, I told you so. (Rezo’s are available through Open Table).

The verdict… I love it. How can I not? They have my Crispy Tuna Roll. But the truth is they really do all of it well, and it a hip and sleek dining room to boot. Just make sure your Visa or MC has some room on it, your gonna need it.