Fig and Olive: Slip Sliding Away

After a Decent Start, the Upper West locale falls into blah.

Ever since I learned about the hip and trendy "Fig and Olive" on NY's Upper East Side (and now downtown as well) I wanted to check it out... I mean, I am all about the concept of this place. Small plates... olive oils... great wine... I get it.

Well perhaps I waited too long, because my visit to Fig and Olive was a massive disappointment.

After being greeted kindly at the door, we were shown to an awkward, cramped table for three... which resembled 2 cocktail tables pushed together. OK, well, if the food is happening I can deal with this. But, I do like being comfortable when shelling out good money. Whatever, I'll deal with it. 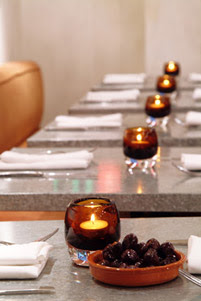 From there, the evening (company aside thank god!) just failed.

Out came the bread. A basket of thin sliced, bland and chewy bread. It came with a dish of three olive oils, but I couldn't tell you what was what, as nothing was explained to us. I can tell you the olive oils were not high in quality... and this is coming from a cook (that's me) who has some pretty kick ass Olive Oil in his pantry.

The front page of the menu, a listing of small plates consisting of veggies, cheeses, crostini and tasting plates... were average if not below average at best. I ordered three crostini... the Artichoke Tapenade-Asparagus-Tomato-Parmesan, the Bresaola-Goat Cheese Black Olive Tapenade, and the Shrimp-Tomato-Basil-Lemon. All three were horrible on soggy lifeless bread (my god toast the bread at least?) and were quickly thrown together. The ideas here were good, but poorly executed. A crostini of warm grilled bread topped with the same ingredients and presented properly would have helped a great deal.

The group also ordered the fennel starter (again, average at best) as well as the Prosciutto Melon Carpaccio, which was by far the best dish.

Service waned here, and I'll be the first to admit that the three of us were talking up a storm (old friends catching up)... but the attitude from the waiter that we were putting him out by not having our order ready was inexcusable. Note to FIG and OLIVE: uh, we are the customers.... that means, we can take our time, visit... drink.... talk... whatever. So, get a grip.

When we finally placed our dinner order, the entrees solidified my feeling that the entire place had thrown in the towel. I ordered the Rigatoni Mediterraneo (shrimp, tomato, garlic, cilantro, chives in Sundried Tomato Olive Oil). This dish had decent flavor even if the pasta was overcooked and flat, but the 2 inches of oil in the bottom of this bowl showed the sloppy nature of lack of caring by this kitchen. What a waste.

My partner ordered the whole Branzino fish which was plopped down in front of her without an offer to debone. Our other guest ordered the Rack of Lamb special which he found decent. Nothing stood out.

Let me take a moment to remind those of you who read this blog that I don't go to restaurants to find things wrong. There is nothing I love more than a spot that gets it right. But when so many details are swept under the rug, I feel obligated to warn anyone who is planning on going. I have had far superior meals (even tapas) elsewhere... and after dropping $300 (food and 2 bottles of wine) I expect more.

So sadly, I blog about this place, disappointed and let down. It's a perfect example of an establishment that has decided to mail it in... after having some early success.

Well, in NYC, you need to bring your A-game, day in and day out. Those places that continue to push the envelope nail the details, and rethink their menus on a daily basis. At this rate, this Upper East Side locale will struggle to retain their buzz, and by looking around the place, I wasn't the only disappointed patron.

That's my story and I'm sticking to it.