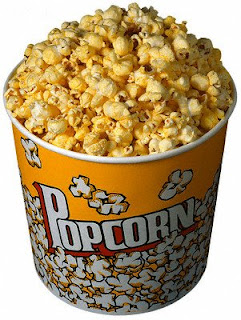 I Admit It, I Am An Addict


Today is National Popcorn Day, according to the Popcorn Board, which is good enough for me. They have a bunch of popcorn recipes here, along with history and FAQ's about the stuff. We can't live without popcorn. It's essential for the movies, of course. But it's also helpful when you're trying to lose weight (have you not tried the popcorn diet?). The Boy Scouts sell popcorn to raise money every year; their microwave popcorn is the best I ever had. Lest you pooh-pooh that, know that popcorn was the first food tested in a microwave oven. At Rio Mar in New Orleans, Chef Adolfo Garcia serves popcorn with the Panamanian isotope of his ceviche selection. He says that's traditional in Panama. Hell, I own a commercial popcorn machine and keep it in my apartment here in New York.

Popcorn has become such a popular snack in so many forms that a great deal of study has been applied to it. The most fascinating to me was explained by Orville Redenbacher, when he appeared on a radio show a long time ago. He said some kernels pop into something like mushrooms (rounded pieces) and others into what the industry calls butterflies, with "wings" curling away from the center. Orville, who did a lot of popcorn research, said that the mushrooms look better but the butterflies taste better.

Regardless, today we celebrate. I just love the stuff.


Delicious-Sounding Places
Popcorn, Indiana is in the southern part of Indiana, just north of the Grits Line. (That means the standard combination breakfast found in roadside cafes will include not grits, but hash browns.) It's also seventy-four miles southwest of Indianapolis. It's well out in the middle of farmland, which does indeed grow its namesake variety of maize. In fact, a company there has built a brand out of the town's name, and has a website telling about their corn and the history of the town. It is, of course, www.popcornindiana.com. If popcorn doesn't satisfy your appetite, it's about a four-mile drive up Popcorn Church Road to Arthur's Corner Cafe in Springville.


Edible Dictionary
popcorn, n.--A variety of corn (maize) whose kernels have a center of soft, moist starch surrounded by hard starch. When the corn is heated, the moisture in the center heats beyond the boiling point of water, When it finally boils, it does so suddenly and completely, its gases expanding with such force (almost ten times normal atmospheric pressure) that it puffs up the hard starch and makes it blow out of the hull. The main tricks behind excellent popcorn for the growers is to let it dry until the hulls are hard, and growing the right variety of corn. Popcorn has been known for thousands of years, and was very familiar to Native Americans. It seems always to have been a source of delight and festivity.


Today's Cooking Tip: Don't let anybody tell you that better popcorn can be made in a pan than in a microwave oven. It was once true, but is no longer. Unless you have an industrial-strength popper.
Posted by André Mika at 7:37 AM