Patsy's Is The New KING OF PIZZA in NYC

It Really Is The Best Pie In New York City

It's wasn't long ago when a friend of mine and I were talking food, and the subject of pizza came up.

This is a trick question. Everyone in NY knows there are literally 10 places to get world class pie from... so I thought carefully before I responded.

But I was lying. I could have said DiFara, John's, Daniello's, Otto... well, you get the picture.

It was then he confessed to me that he believed the best pizza in the city is on the Upper West Side at Patsy's. 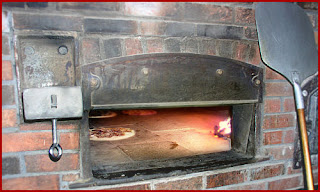 I dismissed this claim until a month ago, when sure enough I found myself walking down the street in front of the very same Patsy's he had anointed King Of Pizzas.

From the moment I walked through the door, I knew I was in trouble. The smell was fantastic... the crowd was buzzing... the pizzas were flying around the room, landing on small stands that were hovering 10 inches about the tables. Cold Stella filled old draft mugs.

Quickly I sat down, and got started with a terrific arugula salad. (warning, this salad can feed a family of four and still give you enough for a doggie bag home).

But before I ruined my appetite, I ordered a sausage and onion pizza... and waited in expectation.

This was one of the best pizza's I've ever tasted... not just in NYC.... but anywhere.

The crust was perfect... thin, crispy and worthy of holding onto the toppings without falling apart.

The toppings were homemade and terrific. The sauce delicious balance of sweet and bold... and the cheese obviously homemade. The wood burning oven was magical and I could taste the amazing aroma of the oven. 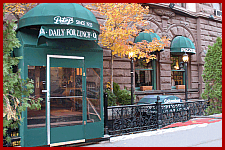 How had I missed this in the past?

I devoured this poor pizza, who didn't have a chance.

So, here, I now profess.... Patsy' as the best pizza in Manhattan.

Until I find the next joint.