Dining With The Turks at Zeytin

Could the Best Turkish Food in NYC Actually On The Upper West?

I am an international man of mystery.

Not in my adventures, but my culinary tastes.

One cuisine I love is Turkish. Maybe because it’s closely linked to Lebanese, or Israeli… or Persian… or maybe because I love the “meze” style of eating the stuff. No matter how much I eat… I never get tired of this food. 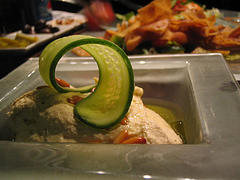 My recent obsession of falafel has led me to start exploring the gabillion offerings here in NYC, and low and behold I found one of the best Turkish offerings in my own Upper West Side neighborhood… a true gem named “Zeytin”.

Zeytin as a word means “olive” in Turkish… but in this incarnation means fantastic food.

I found myself at the restaurant on a cool but not freezing November night… and opted for a table outdoors… a patio we would have to ourselves. We began with a cocktail (uber large martinis poured happily) but could have easily ordered a glass of wine from a solid but unspectacular wine list. All is well.

Making food choices at Zeytin can prove challenging. The truth is, the cold and hot appetizers are so terrific, you can (and next time we will) make a meal of them by themselves.

Wanting a large sample, we ordered the mixed plate of cold meze and were blown away. The hummus was top shelf… rich and flavorful with the perfect balance of chick pea and tahini. Along side was a bowl of tangy Cocik… a thick yogurt sauce with diced cucumbers and garlic. On the plate as well was maybe my favorite, Hoydari… a scoop of thick strained yogurt with dill, mint and garlic… as well as delicate grape leaves stuffed with rice, pine nuts, black currants and herbs… and eggplant salad, grilled smoky and mixed with fresh tomatoes. Terrific.

If it sounds like a lot of food, well, it is. And coupled with the numerous slices of delicious homemade flat bread, we were getting full. But of course, we had ordered dinner, so we decided to tighten our belts and move ahead. 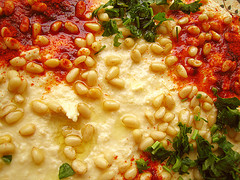 The main courses at Zeytin and well prepared, and beautifully presented. A mild (almost bland) stuffed chicken breast arrived filled with rice, pistachios, peppers and currants. It was a nice dish, but didn’t quite live up to the quality of the meze we had experienced.

That said, the second entrée did. Iskender, a dish of roasted lamb and beef, served atop crispy pipe bread, topped with a spicy tomato sauce with browned butter and yogurt was terrific. The meats were tender, and the dish was a perfect blend of Turkish flavors. Highly recommended.

Of course there are salads, hot apps, desserts… but the experience I would recommend is this.

1. Call someone you like.
2. Find a cozy table at Zeytin.
3. Order a bottle of wine.
4. Order the Mixed App Plate, and a few hot apps.
5. Skip dinner (unless you are a big eater, then split a chicken shish)
6. Split a wonderful dessert
7. Enjoy a brisk evening walk in a charming Upper West Side neighborhood.