It Really Is All That - Peter Lugars

Let me preface this post by saying the following... if you live in New York, you are not a New Yorker unless you've been to Peter Lugar's.

Now that is a pretty bold comment coming from a guy who has now called New York home for 3 months, but I can tell you one thing... I know when I've fallen into a historical black hole, and it happened to me last Tuesday evening.

Getting There
To get the full effect of the magic of Peter Lugar's Steakhouse in Brooklyn, one must take the subway. Yes, it can be a bit "strange" climbing down the winding stairs to the somewhat seedy neighborhood below... but as you walk down Broadway several blocks west, you begin smelling charred Grade A beef. Then, getting mugged seems kinda worth the risk. 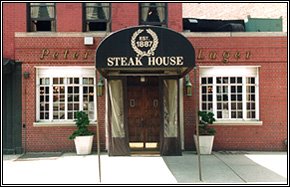 Yes, it smells that good.

Peter Lugars is a New York instituion. Built on quality beef, no nonsense service and simply great everything else, the store stands proud in it's bleek surroundings. I can only imagine the neighborhood a hundred years ago... when Lugar's was in it's infancy.

Entering the restaurant, the chatter was that of a busy midtown dining locale... not a funky Brooklyn nook.... but the revelry that happens at the bar is certainly infectious. It is not that of a celebratory "you got the job"... or "way to win the Johnson account"... it is that of, holy crap, in a few minutes we get to eat (looking towards the dining room) in there. That's right... the spirit that binds the customers of Lugar's is that of one thing and one thing only. Steak.

The Meal
I happily sipped a tall, dry martini while waiting for our table (reservations are mandatory, mind you) and grinned in the spendor of it all. Then it happened... my first inclination that the evening would be better than even I expected.... a mountain of hot, fried bacon passed inches in front of my face. I asked my colleagues, "oh my god, what was that?"... they simply replied "the appetizer".