Center Cut: An Explosion of Average

Expecting More, A Night That Resulted in Blah

Unlike other bloggers and food reviewers, I’ve never been a Jeffrey Chodorow hater. Sure, our favorite convicted felon has had a few bombs, but he has also had a few spots that remain popular in the city which in this day and age is an accomplishment. Not that I am a huge China Grill fan (my last visit uncovered one of the worst meals I have had since I moved to NYC), but I do adore the plantain fried rice at Asia de Cuba and have had many a fun night dancing away at Rum Jungle in Las Vegas. 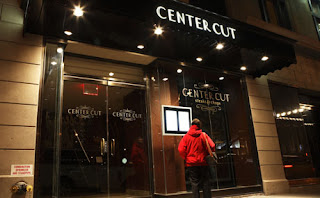 So when I venture into a Chodorow spot these days, I enter with an open mind and neutral palate. My last experience at a China Grill Management store was the newish “Center Cut” at the Empire Hotel…. on Valentines Day.

Having owned 2 restaurants, I am big on details. Let’s start with a greeting and the girl at the door.

The week prior to my reservation, which was early (before 7), I was called not once, but twice to confirm I was coming, and that I WOULD BE ON TIME. Both times, I said “of course”, and sure enough, that evening, I arrived 5 minutes early for the rezo.

RULE # 1 : IF YOU HAVE THE BALLS TO CALL A PATRON TWICE TO MAKE SURE THEY ARRIVE ON TIME, DON’T MAKE THEM WAIT 30 MINUTES FOR A TABLE ON VALENTINES DAY WHILE THEY SIT IN THE BAR AND WATCH EVERYONE ELSE EAT THEIR DINNER.

Once we did get a table, we encountered a friendly waitperson who was there physically, but not mentally. It was clear that she would rather be on a date herself on Valentine’s Day… so we got a strange vibe from her all evening. This was clearly a person who would rather be someplace else.

Regarding the food, I found all of our dishes average and sometimes a smidge better than average. The problem is, nothing was wow.

The problem with that, is NYC is wow. Restaurants with longevity in the city are wow. Wait staffs are wow. The food is wow. The night is wow.

Great food, staff and ambiance can often makeup for miscues at the door and long waits… but on this night, it was apparent that retribution on this level would not be mine.

I won’t describe each and every bite of the evening, but I will walk you through the following:

The Bread: Fresh Popovers… well prepared and quite good.

Salads: Heirloom Salad and Lobster Stuffed Mushroom Caps…. Salad was very average with somewhat mealy tomatoes and the mushroom caps were overpriced and average at best.

Side Dishes: The Creamed Spinach & Artichoke Pie is a gimmick…. and dominates the table. The Corn and Manchego gratin was well prepared and a solid dish.

Steaks: The Steak Oscar was average and included crabmeat that had a strong scent of the ocean…. This wasn’t fresh jumbo lump. Perhaps my days growing up in South Louisiana and dinners at Commander's Palace have jaded my view of all crabmeat? My companion had a steak from the ala carte menu that was prepared to her liking, but again, didn’t set the world on fire. I would say this flavor and grade of beef would rank a notch below craftsteak or Quality Meats.

Dessert: the menu looked decent (a lot of tableside flambé) but by this time, we wanted to bolt. It was an espresso and see ya later. 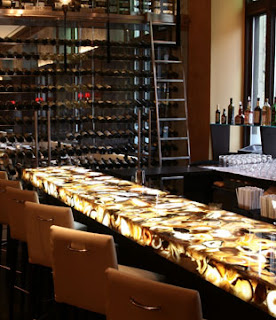 THE FINAL WORD: I love the Empire Hotel, the vibe, the rooftop bar, the locale. The addition of Center Cut is just bizarre. You can’t open a blah spot and think it can keep up with the hip vibe of the space that surrounds it. And oh yea, NYC doesn’t need more steakhouses. This could have been a real showcase spot for nearly any other type of store with a great menu…. So while I’m not putting it on Deathwatch, I would be shocked to see the store gain a loyal clientele when I can’t be seated within 30 minutes of a reservation I booked a month in advance. Additionally, as much as I like long meals, this night bordered on a hijacking. It was nearly 2.5 hours before the steak arrived, and so drawn out that I couldn’t wait to leave.

I'm still not a Chodorow hater.... I'd just like to go to dinner in New York at one of his restaurants and walk away saying.... wow.
Posted by André Mika at 10:00 AM