Get Ready. There is Bison in Midtown.


Ted Turner has bison. And a ranch. And CNN.

The place was, well, not what I expected.

So what did I find?

Well, at first glance the wood-clad room looked about like any other Bennigans-like establishment, smallish and without most of the kitsch, except for the singular, gratuitous bison head. The place was simple, and exuded nearly zero personality… which is just fine if you are making your statement in the kitchen (I hope this is the plan).

My visit to Ted’s was a hamburger mission, and I wasn’t going to be denied. It had been weeks since I had a good hamburger, and I had heard that Ted’s had a good thing happening with the bison burger…. so here I was.

First, getting a table at lunch is a problem. The prices are in that “it’s just a hair to expensive but what the hell” range, that spells trouble when it’s 10 degrees outside. That kind of weather is certainly worth another $5-$8 dollars of consideration. So, we wait. 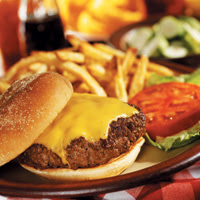 Our midweek noon encounter was a packed one, with seemingly nobody in charge. We did receive the vibrating remote (thank you Olive Garden), but were later greeted in the bar by a wait person who told us to ditch it, as she would find us a table. Hmmm, I smell an employee meeting coming on.

After she sat us in a strangely covert way, we were greeted by a slightly insane server who quickly made sure we had enough beer to get through the wait of actually ordering and eating. Job well done.

Let’s hop to the food.

First, the bison. If you like good, meaty tasting burgers, you will like bison. It’s not a gamey taste (which I can’t tolerate), it’s a big, meaty one. My burger, cooked medium well (order on notch higher than usual says the waiter guy) was moist in the middle, and crunchy-charred on the outside. Yum.

The bun (nearly as important) was of the Kaiser roll variety, and also held its own. It came with a little grease on the bottom, but hey, who’s complaining. That’s flavor in the burger world.

The fries (extra $$) were cold and average, a disappointment when you consider that these guys try to take hamburgers seriously.

The rest of the menu features chicken grilled sandwiches, apps (we had an OK stack of onion rings) and steaks of the bison and regular beef variety. Daily specials look good, as did the soup of the day which we tasted… a yankee-styled gumbo that was good and hot, but not very authentic. A better bowl can be had at Cosi (no, really, Cosi).

It’s just OK, which can be the kiss of death in this city, where mediocrity can mean papering up the windows. But with the need of burger joints in Midtown, Ted’s will likely survive. I enjoyed my burger, and it hit the spot… just not the memorable one. I may be back from time to time, but I won’t be opting for the vibrating remote… I’ll be moving down the street where the wait isn’t quite as long.

Time to cab over to Hell's Kitchen for chicken and waffles.