Does Puck Make "The Cut"?

Get Ready For Dinner and a Show in Los Angeles


I’ve imagined a lot of restaurant interiors in my lifetime… and had the opportunity to work with my wife Jami designing two of my own restaurants… one, a Cajun crabshack nestled into Chicago’s Gold Coast (Beignet’s Louisiana Kitchen) ; the other a Spanish tapas room in Baton Rouge’s reborn downtown district (The Lava Room).

My days of owning and operating restaurants are gone for good (ok, never say never)… but my appreciation for beautiful spaces continues to flourish.

Last week I had the opportunity to dine at the highly anticipated “CUT” Steakhouse, the uber-cool creation of Chef Wolfgang Puck and legendary architect Richard Meier. 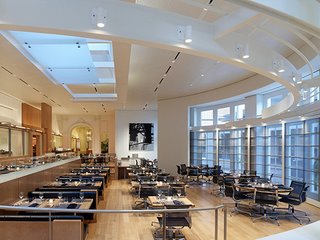 Upon entering the space, it was obvious that the design team was going for “wow”, and most often, that’s what they get.

This place doesn’t look like any steakhouse I’ve ever seen. It’s a California cool space washed in pure whites and natural light. Instead of dark mahogany booths you get blond teakwood. Clubby leather chairs give way to Knoll-style chrome and mesh, and the amenities are clean and well appointed. Imagine having dinner in the Design Within Reach showroom. Or the lobby of MOMA.

It was a nice change.

For me, it’s always been about the food, and CUT does many things very well… and they have to. Being located in the Regent Beverly Wilshire (A Four Seasons Property) comes with a price tag, and believe you me, this place ain’t cheap. Not that a quality steakhouse should be… but there is expensive… and also “holy crap this is expensive.”

You’ll be hard pressed to find a dish on this menu you recognize, other than the steaks themselves, which nearly all come bone-in. This is fine by me, as bone-in usually means more flavor… but when you are dropping $48 on a piece of meat, you’re expecting something special.

Apps here can be eventful and silly at the same time. The Kobe Beef Sashimi is a popular choice and is solid. A classic steak tartare also makes an appearance. There is Warm Veal Tongue and Maple Glazed Pork Belly for those more adventurous, and an Heirloom Tomato and Goat Cheese dish for those who aren’t. In the middle, you have a wide variety of options including a Lobster and Crab “Louie” cocktail, Foie Gras and a Bone Marrow Flan which steals the show. It’s a nice selection… but at an average price of $20, be careful. You haven’t ordered the wine yet.

Kobe beef, as well American Waygu made an appearance in the US several years ago, and both continue to build momentum. Both varieties are available at CUT, and both come with a steep price. While a 6oz American Waygu can start around $60, the Japanese Kobe will set you back $120 for an 6oz New York Strip… and $160 for an 8oz Ribeye.

But is it worth it?

Good question. To me, no…. as I love the flavor of USDA Prime Beef, cooked perfectly. Sure, the Kobe stuff cuts like butter and tastes the same, but as unique as that taste is… it’s not the hearty steak I’ve come to know and love. Should you try it once? Absolutely. Would I serve it at a holiday BBQ?

Steaks come with a variety of sauces, and I’m fairly sure every sauce on the planet is represented. From Mustard, to Chimichurri, to Bernaise, to Foie Gras “Rossini” style, and extra $2 will aid you in covering the taste of the steak you just mortgaged your house to buy.

The sides are delicious but still sides. The Swiss Chard is exceptional, and the fingerling potatoes “Lyonnaise” interesting. There are also mushrooms galore as well as Potato Tarte Tatin.

For those who aren’t as fond of red meat as I, there is a nice selection of fish dishes including Sea Bass, Big Eye Tuna and lobster… and a few pork and duckling offerings to make you pause. The best non-steak option may very well be the Veal “Holstein Schnitzel” with capers and fried egg. This is a dish Puck does better than any chef in America. 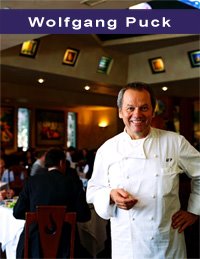 So good in fact, that I made a special trip to his Las Vegas eatery “Postrio” several years ago to eat it. It’s offered at lunch on the patio, and served with spaetzle and warm potato salad… maybe I’ll save this one for another time.

By the time you’ve reached dessert you are full… which is a shame, because the desserts looked amazing. On top of that, about this time the place becomes flooded with the jet set. On the way out, I rubbed shoulders with a supermodel and Don Rickles. Only in LA.

But in the end, I couldn’t figure out of we were paying for the meal… or the show. The cooler than all get out room, the tableside raw meat presentation, or just the honor of sitting in a Meier space eating stuff.

You will likely find a better steak down the street, but I must admit the space can be intoxicating… and for those who live the scene in LA, this is your joint.

Enjoy it. And bring lots of cash.
Posted by André Mika at 9:47 AM