So, New York may be the greatest food city in the world... but believe it or not, it is lacking in a few areas.

Yes, fried chicken. We do have a few spots in the city with decent chicken, but the truth is, even "Blue Ribbon", the king of NYC restaurant chicken, can't hold a candle to the southern stuff you can find in every grocery store and gas station south of Tennessee. Think Albertson's. Mrs. Winner's. Etc....... 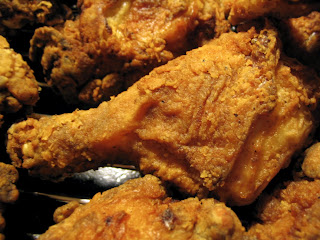 So what do you do when you can't find the right piece of chicken?

You make it yourself. Below, find a recipe that I love from New Orleans food guru Tom Fitzmorris.


Tom's Confession: He never makes fried chicken the same way twice. It's a work in progress that's been going on for over ten years. This recipe is an amalgamation of the ideas that resulted in the most delicious chicken--so far.

The primary challenge in frying chicken is that the various pieces cook at different rates. This is why, I suspect, the Colonel used to cut his chicken differently than the standard breast-wing-thigh-drumstick configuration. I like that idea, if you're up to cutting your own chickens. What you do is pull the breastbone of the chicken out with the two tenders still attached. This removes about a third of the meat from each breast, making it more the size of the other pieces.

The problem is still not entirely solved. Breast meat cooks faster than leg meat of the same size. Consider that as you cook. One more thing. There is no question that the flavor of the chicken gets better after you've fried one chicken. Or that it starts deteriorating after you've fried about five chickens. So refresh the oil--strain it and add fresh--along the way.

1 quart buttermilk
2 Tbs. salt (I know this seems like a lot, but only a little of it will remain on the chicken)
1/4 cup yellow mustard
1 Tbs. tarragon
1 Tbs. dill
1 Tbs. garlic-flavored Tabasco
2 whole chickens, cut up into breast tenderloin, two breasts, two thighs, two drumsticks, and two wings


1. Combine the marinade ingredients, mixing until the salt is dissolved. Divide the chicken among gallon food storage bags. Add enough marinade to complete soak the chicken. Place the bags in the refrigerator eight hours to overnight.

3. When ready to begin cooking, combine the coating ingredients in a bowl. Pour into a large, clean paper bag.

5. Put three or four pieces of chicken into the bag with the seasonings. Shake to coat uniformly. (The bag method will also shake off excess coating.)

7. As you remove the chicken from the pot, drain it in a large sieve over a bowl. Shake it a couple of times and let it remain there for at least one minutes. If nobody grabs it immediately (the recommended way of eating fried chicken), keep it warm in a 150-degree oven until serving.

Serves four to eight.
Posted by André Mika at 2:32 PM