Little Did I Know… The Bitches of Manganaro’s

Evil Is Lurking On 9th Avenue... So Watch Your Step.

It’s a beautiful Saturday August afternoon in Manhattan. Not just beautiful… spectacular. 75 degree temps, clear skies… the smell of food shops in the air. I love this place.

Even though I had already smoked a 7 pound chicken this morning, I yearned to escape from my midtown digs at 28th and 6th and venture out to find some, well…. meat. Sausages, flank steak… anything fresh will do. Great butchers abound in this city. This will be fun.

Since my second home “Faicco’s” in the West Village is closed today (family on vacation one week a year) I decided to venture west…. to a place I had heard much about… Esposito’s Pork Store, a fixture on 9th avenue forever. It was time to pay them a visit.

Let me tell you now that this post isn’t about the nice people and good sausage at Esposito’s.

When I arrived by cab, I hopped out and took a look at the block… and realized I could use a sandwich. It was 2:30pm and the stomach was growling. I had some time to kill. I needed something, since I didn’t have a chance to get my bagel on this morning. Maybe I would get lucky?

I walked down the block about 50 feet and encountered a gigantic sign that read “Mangenero’s”. The spiffy looking restaurant had a menu out front with all of the Italian hero sandwiches listed…. Chicken parm, salami, ham, etc…. you get the picture. There was a nice crowd there for mid-afternoon, and I figured it would be hard to go wrong there. 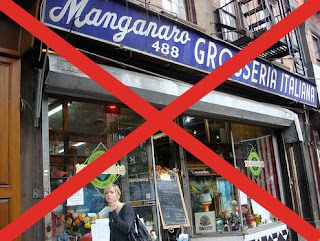 About 10 feet past this store was “Manganaro Grosseria Italiano”…. an old school grocery and deli, that had charm and history… literally since the 1800’s. I had hit the jackpot. This is where I would lunch. It looked very familiar, but I had never been there. This is exciting.

I quickly entered into an empty space… long and narrow, and noticed 2 woman and an elderly customer in the back. Taken by the nostalgia and feel of the place, I quickly pulled out my camera and snapped a picture of the front counter… a shot that looked as if it had been dressed by a Hollywood set designer. Green shelves, pieces of meat, boxes of pasta. I am in heaven.

“Don’t do it”, screamed a woman from the rear of the store.

I wasn’t sure if in fact she was yelling at me, as I was hidden partially by a cabinet in the storefront. But then it happened again.

“I’m telling you don’t even think about it”, she shouted.

In about 4 seconds, the two irate Italian woman had bolted to the front of the store as if they were training to run the 50 yard dash for Italy in the next Olympics.

“Photos are for customers,” she snapped. “And I don’t see any food in your mouth”.

I then tried to explain to her that as I was making my way to the back of the store, I had stopped to take a photo.

“Yea, yea… you just stick with that story….. I know your kind”, she remarked.

“My kind?... because I write a food blog and I love to talk about great places to eat?”, I said.

“I knew it… your one of those bloggatweets people…. whatever you are. You don’t care about people or food… you just steal everything”.

Well folks, at this point it is clear to me that these two crazy Italian woman are clearly out of their minds. Here I am with an appetite, my wallet, an appreciation for their store… and I am being verbally abused by both of these insane, abusive, horrible human beings. I just want a freaking sandwich. What the hell is going on.

“I was just in the neighborhood to buy some meat on the corner and thought I would walk down….”, I said.

And then, it hit me. I had seen this store before. Bourdain. No Reservations. Of course. The place next door. The sandwich feud. This was all making sense. These two delis have been feuding for decades, and of course these idiots think I give a shit. 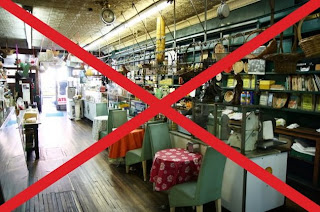 “I tell you what, come take a look while I delete this photo from my phone, and I’ll be on my way”, I said.

“You can shove that phone up your ass for all I care. Where are your manners? What do you care about us? All you people do is take, take… where is hello? Please?”, she said.

Please keep in mind, all I did was come in for a sandwich, and I snapped a pic on my iPhone. At this point, I am trying not to go postal on these two idiots.

About this time another guy entered the store, and began to look around. It was obvious he had never been there before. He was wearing a “I Love Shea” t-shirt.

“Right, Another one. There’s the door”, she said.

From the street his friend exclaimed, “I told you not to go in the store… they are crazy bitches who would spit on you…. They are the laughing stock of the neighborhood.”

About this time, I can’t help myself. I simply burst into laughter. I have to be on some type of Candid Camera show.

And with that, I exited the building.

So I guess the moral of the story is, unless you love being abused and crapped on by people who you are trying to give your money to, stay away from Manganaro Grosseria Italiano.

Judging by the large, happy crowd next door, I would recommend the Manganaro HeroBoy place I passed on. Next time, I’ll follow the crowd, delicious smells and common sense….. and not my nostalgic instincts.

After all, I just came in for a sandwich.
Posted by André Mika at 4:00 PM