Heat Up The Grill

It's Time To Cook With Some Flavor!

Summer is here in NYC.

At least it feels like it. And even though I have been snow-grilling all winter, I am breaking out my favorite recipes and beginning to incorporate my grill into my everyday kitchen recipes.

I know what you are saying…. why is a restaurant blog telling me to stay home and cook?

Well, truth be told, sometimes you just can’t get certain dishes in the city. Sure, there are several joints that do “shrimp and grits”…. but not like this. For this recipe to work, you need to enhance the savory nature of the grits (hence the cream) and create a layer of flavor with the bacon fat. The entire thing is very easy.

I’ll resume my restaurant reviews next week, but in the meantime, enjoy this recipe… one of my favorite Sunday morning brunch treats. 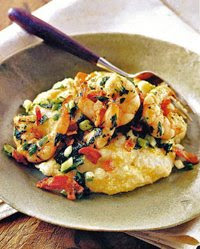 FIRST
In a medium saucepan, bring 2 cups water to a boil. Add the grits and salt and pepper to taste. Stir well with a whisk and thicken. Slowly add half and half, and then heavy cream, stirring all the while. Reduce the heat to the lowest possible setting and cook the grits until all the liquid is absorbed, about 10 to 15 minutes. Stir occasionally. Remove from the heat and stir in the butter and cheese. Keep covered until ready to serve.

THEN
Rinse the shrimp and pat dry. Coat shrimp with olive oil, season with creole seasoning (or at least salt and pepper), and place on medium hot grill until just pink. Remove and bring inside. Fry the bacon in a large skillet until browned and crisp, then drain on a paper towel. Add the shrimp to the bacon grease in the skillet and sauté over medium heat just until they heat through, about 2 minutes. Do not overcook! Immediately add the lemon juice, parsley, green onions, and garlic. Remove the skillet from the heat.

AND FINALLY
Pour the grits into a serving bowl or serving platter. Pour the shrimp mixture over the grits. Garnish with the bacon bits.
Posted by André Mika at 6:48 AM