No restaurant review today, just a tip of the hat to a true Louisiana original, Justin Wilson.

Today is the birthday, in 1914, of Justin Wilson, in Roseland, Louisiana.

I first heard of Justin from my Grandmother (my Nonnie) who sometimes spoke of Justin, as she new him as a boy. She was from Amite, Louisiana (just north of Roseland)... and new everyone in the parish. She often laughed when she heard him speak, as she didn't remember the "thick" cajun accent as they grew up. 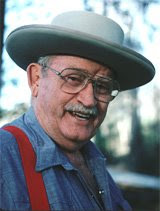 He was not exactly a Cajun, but that didn't stop him from becoming the world's best-known ambassador of Cajun culture. He picked up most of his style, "speech", and stories while working along Bayou Lafourche as a young man. He first came to public attention with his comedy routines, but soon he started talking about cooking. Wilson's pioneering television cooking shows became among the most popular of their kind. The recipes, it must be said, were less than brilliant. He was not a stickler for using the best ingredients, and never had a problem using canned this or that. But that's quite authentic. Justin Wilson died in 2001, but his TV shows are still in circulation, his many cookbooks still sell well, and his Cajun jokes are still being repeated--I garontee.

Long live the memory of Justin Wilson.
Posted by André Mika at 2:54 PM