Let The Games Begin: Where Is The Top Dog?

It's NYC vs. LA in the War of the Wiener


Before the complaints begin, yes, I know, it is entirely possible that the best hot dog in America doesn't exist in LA or NYC.... could it be the Varsity in Atlanta? or perhaps Gold Coast Dogs in Chicago?.... dare I say a Lucky Dog cart in the French Quarter?

Well for the sake of a massive case of indigestion and incremental yet substantial weight gain, I'll keep this initial battle between the two cities I know best... NYC and LA. 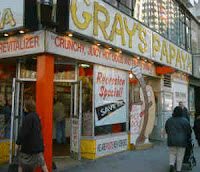 Grey's Papaya: The old, cheap stand by is the self proclaimed king of street eats 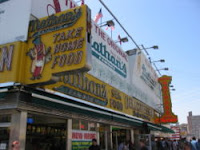 Nathan's Famous: The dog that started it all 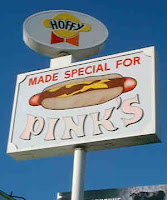 Pink's: The reigning champ is having it's share of problems

Skooby's: Coming hard and fast to take the top spot

The Weiner Factory: Is LA's Top Dog in the Valley?


Stop #1 on this, the battle of the wiener, was Skooby's... the hot little stand on Hollywood Blvd in Los Angeles. 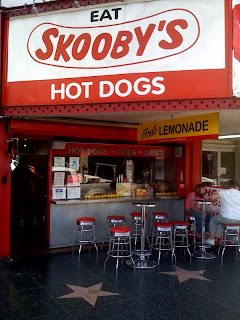 The Place
Don't expect much. Skooby's is a smallish, cramped space on a somewhat scary stretch of Hollywood Blvd. There is one lonely table within (a horrific experience if the place is packed) and a counter and 2 tables outside. It is somewhat clean, and organized which is a good thing, as when these guys get busy the place can look as if a bomb went off inside. Generally speaking, they do a fantastic job of getting you served in short fashion... with hot food.

The Bun
Extra points here. These are more than Hot Dog buns, they are homemade rolls that are grilled to perfection, warm and toasty. Genius.

The Wiener
A classic, meaty, snapskin dog. It is mild in flavor, and although I like mine with a bit more spice, it was still way better than 90% of the lifeless, bland dogs you'll usually find out there. 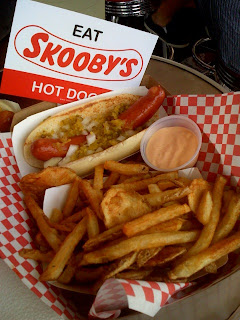 The Deal
Skooby's has a belief, which I concur... the best Hot Dog is often one you make yourself... I mean, only you know exactly how much mustard you like... so, basic dogs at Skooby's come plain, so you can dress them with the basics, found on the counter... plain and spicy mustard, onions, relish, kraut, hot sauces, etc....

Other dogs include a chili cheese dog with Guinness Chili and a garlic dog... but skip the extra dogs, you won't need them. The fries here are the deal. They are homemade from a box of real potatoes in plain view, and fried to crispy perfection, served with an addictive garlic aioli... (think Zankou sauce, but creamy and made for fries). Oh yea, the make delicious fresh squeezed lemonade as well. Look out Pinks.

Killer stuff. Great work on the details have vaulted Skooby's to the top of the LA heap in many peoples minds. This will certainly be a high contender to win my TOP DOG award. Pink's get ready... the bar has been set high!
Posted by André Mika at 1:58 PM