When I first glanced at the flight plan for my recent trip to Europe, I was overjoyed to see I had a change in planes in one of my favorite places, Frankfort, Germany.

Sure, airports are airports… but Frankfort is special. As the name alludes, Frankfort is home and birthplace of the frankfurter, and as you may know… I am a sausage fanatic. So true to form, the Frankfort airport has several outlets to stock up while you are waiting for your flight to faraway places.

Just as my excitment was growing, I looked at the flight times. Ouch. Fourty five minutes between flights.

Well, this is a problem.

And sure enough, as carefully as I tried to map out my strategy, the day would turn into a logistical nightmare… with the real possibility I’d be leaving Frankfurt sausage-less. A mortal and culinary sin. 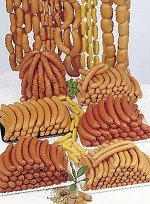 As my flight from Nice rolled to a stop on the Frankfort tarmac, I glanced at my watch as if I had just began taping an episode of “Alias”. It was 9:14. Seated in the last row of an overbooked airplane, I needed to get off the plane, board a bus to the terminal, clear passport control, walk down 2 long hallways, re-enter the departure terminal, have my carry-on bags checked and pass through security, and run down two very long hallways to gate 34. Before 9:50. The flight would leave at 10:00am.

Forget shopping or going to the bathroom… just making the connection would be tricky.

Of course, my fellow passengers had no idea of the seemingly impossible task ahead as they slugged along… which was favorable. Could I maneuver around them in warp speed?

It took what seemed like an hour to reach the terminal, and get into the building, through passport control, and to the sea of people now waiting to re-enter the terminal and pass through security. With this many people, just getting to the place would be difficult. With the sizable crown growing and only a few positions available to check people through, the crowd grumbled and moaned… causing a brief meeting between the 3 officers in charge of the entry point. With my German being marginal at best, I could decipher one thing…. They we going to open 2 extra lines….. and fast.

As I observed, the crowd separated to my left, and like the Holy Grail, appeared what I had seen in my dreams. The Francfort Haus of Sausage.

Now, I am torn. Any moment several new lines will form, and with my knowledge of the plan, I am certain to be at the front of one of them… but when? 30 seconds? 1 minute?

I gazed in a painful, confused manner into the store at a female clerk that could see me agonizing on whether or not I could get in and out. I even stutter stepped twice, like the beginning of a race… struggling with a decision that could possible take me off of an international flight to New York.

Staring at the girl in the store, I mouthed the words “can you check me out in 60 seconds?”…. she paused for a moment, looked at an empty cash register at the end of a long aisle and shook her head yes.

I ran through the store like a madman I know, but karma was on my side. I had hit the wiener mother load.

There was bierwurst, bockwurst, bratwurst. Knockwurst, knackwurst and weisswurst. Frankfurters, wienerwurst and cervelat. Rings and rings of fresh German rope sausages as well as the 2 foot long varieties you would see hanging in a butcher shop somewhere in the middle of town. I though I was going to pass out.

In the next isle are the accompaniments; sweet, hot, spicy, course and smooth mustards (or zenf), every variety of bread and roll imaginable… and jars of kraut and pickled everything to make the sausage happy. Oh yea, they had pretzels, too.

Without thinking, I began grabbing cans and packages like a contestant on “The Price is Right”. With my arms full, I ran to my girl *Inga (replace with a nicer German name please) and dumped it all on an empty counter.

I quickly began grabbing each item and asking the question, “Good… or No Good”.

As I grabbed, she nodded and smiled yes buy that, or frowned so-so you may not need that. 30 seconds later, I had a bag of snap skin frankfurters, weisswurst, bockwurst, 3 rings of beer sausage, a massive German beef log, 2 tubes of mustard and a Visa bill to sign.

Yes, believe it, within 60 seconds I had entered the store, shopped, sorted, purchased and bagged… and was now headed for a line that had not a person in it. 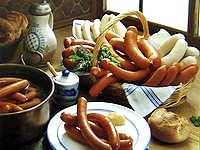 Before I could count to 10, a security officer made his way to my line, unhooked the rope, and pointed me to a newly opened x-ray machine and metal detector thingy.

I felt as if I had won The Amazing Race.

I quickly slipped through security checkpoint number 2, down the hallway yet again, to another ticket control point, and to the gate. She slipped my boarding pass through the computer and I walked down the jetway. It was 9:48am.

Yes, I was the last on, which yielded yet another advantage…. finding an entire row of empty seats and claiming them as my own. I stored the luggage overhead, and pulled out one of the sausage ropes to celebrate.

Settling in my seat, I tore off a piece and nibbled, laughing at the notion that the entire gamble could have gone terribly wrong. About that time, the female flight attendant noticed my snack, and leaned over to me as she looked to see if my seatbelt was fastened.

“If you only knew how good”… I remarked.